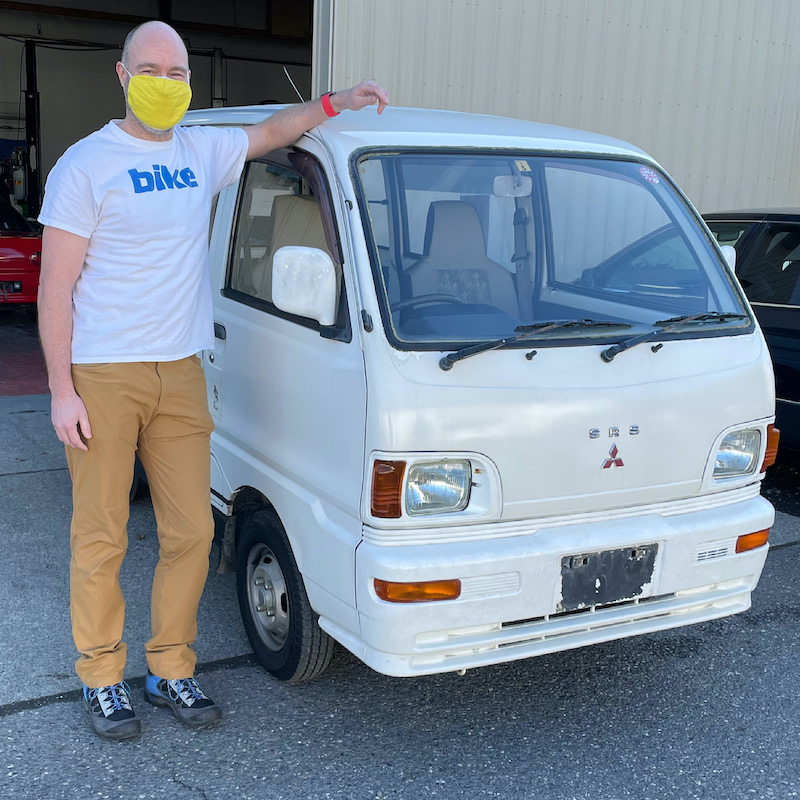 Reactions to this vehicle usually fall into two basic categories: "AWWW!" and "What the hell?"

The easiest way to answer the latter is to refer to the former. But there is a lot more about this odd emergence of reality, and seeing as how this is my medium for documenting all the publicly notable experiences it seems fitting to elaborate about that.

Backing things up a bit, there has definitely been a hole in my vehicular capabilities ever since I sold the Tyrannosaurus (1984 Toyota pickup). This was well-compensated for with the Schleppenwagen (Mercedes Metris van), but nothing since has been as suitable. For a few years I've made-do with either a roof-rack on the ex's Subarus or disassembling my bike and jamming it in the back of my Tesla.

Much of my bike-hauling needs have been actually satisfied of late with my bike-valet and riding buddy, Friar Gnarthaller and his various bike-shuttling vehicles. But it is left to me to limp along begging for help when taking Simon for a ride, and annoying whenever I want to go for a simple ride by myself.

So I've been contemplating a van for a while now. Why a van? Firstly, because having had a couple pickups, I recognize that the "haul dirt" function is incredibly rare for me. And secondly, having tasted the sweet nectar of full van-hood, I know the joy of having my stuff locked away by default, and protected from elements.

Also, specifically, I've been looking for a vehicle I didn't have to care too much about. One of the great freedoms that the Tyrannosaurus provided was not worrying about much. A dent? Don't care. Dirty? Don't care. Something broken? If it doesn't stop if from working, don't care. Like that.

The prime target has been used work vans. Sure, I'd eventually have to add seats if I wanted more than one passenger, but whatever. The temptation of used minivans was ascendent for a while too - because of the ability to also haul larger groups of people by virtue of stow-and-go seating (in addition to the primary bike-hauling purpose). And also somewhat greater reliability of Japanese builds.

Then I and my array of van-enabling friends noticed kei vans. They are hilarious! Oh, but they're way too expensive for my "not caring" budget.

Until this "cosmetically challenged" Mitsubishi Minicab popped up online at The Import Guys near Bellingham Washington. And the rest was a PayPal purchase sight-unseen, a train (and bus) ride to Bellingham, and finally nerve-wracking hip-flexor-straining 95 km/h 6-hour scream down the I5.

So, here we are. Ready to rock. And ride.
And, yes, the kids lost their damn minds when they saw it.

Was it a wise purchase? No.
Is it likely to be a memorable experience? Absolutely, yes.